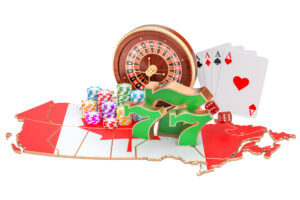 Canada is a beautiful blend of stunning nature and developed urban areas. Canada is the world’s second-largest country by total area, and it is divided into ten provinces and three territories. The North-American country has a population of 38 million, out of which 12 million gambles every week. The provincial gambling corporations have failed to dissuade the people from placing bets on non-government online casinos.

According to the Canadian Criminal Code, under section 6, the foreign operator principle is to be applied. While provincial governments might consider any non-government operator illegal, that doesn’t mean that they cannot operate and compete on the market. This is because the Canadian Criminal Code states that if an offense is to be committed outside Canada’s borders, they cannot be convicted. Online casino companies are capable of eliminating connections to Canada by locating their database and gaming servers abroad.

To better understand what shaped the current laws, we need to take a closer look at the famous 1999 case that involved Starnet Communications International Inc. Starnet was, at the time, an American incorporated company in Delaware. Through the use of various subsidiaries, it was conducting operations from a headquarter in Vancouver, B.C. One of the aforementioned subsidiaries was incorporated in British Columbia, while the others were included in Antigua. In Antigua online gambling is legal and Starnet had a license.

Starnet’s Vancouver branch was composed out of several servers and other applications that allowed persons to gamble or bet via the Internet. To access the website, a user had to connect to the British Colombia servers and they would afterward be redirected to offshore servers. Gamblers would have to download software from a website hosted in British Colombia.

A police investigation was conducted by engaging in online gambling with fake identities and credit cards. When they tried to receive their winnings, the cheques were mailed by SCI officers from the Starnet offices in Vancouver.

A lawsuit under Section 202(1)(b) of the Canadian Criminal Code ensued. Starnet Communications International Inc. pleaded guilty and received a plea agreement. According to the accepted plea agreement Starnet agreed to make changes to their corporate structure to minimize connections with Canada. By doing so they were able to avoid further targeting by provincial governments. The resolution of this case meant that any casino operator that does not have a connection to Canada can operate on its territory. At the moment there are 82 online casinos or bingo sites operating legally under a local license. And thousands of other online casinos are operating in Canada while holding various other licenses.

Gambling Laws in the Provinces

The state of Canada is divided into ten self-governing entities including the following: Quebec, Ontario, New Brunswick, Prince Edward Island, Saskatchewan, Alberta, British Colombia, Manitoba, and Newfoundland and Labrador. We are going to take a closer look at the current gambling laws of each province related to the average citizen.

In Ontario, 82.9% of adults have engaged in gambling at least once in the year 2011. 90% of Southern Ontario residents can arrive at a legal gaming establishment within one hour. There are over 25 land-based casinos in Ontario, both privately-owned and government-operated.

In Quebec games of chance have been legal since 1970 and the offering has only grown since then. Quebec residents can gamble on any online casino that is willing to accept them, including government-operated Espacejeux. In Nova Scotia, there are no government-owned online gambling sites but the residents are free to bet at offshore casinos without any legal repercussions.

New Brunswick, the first to allow video lottery terminals, online gambling is allowed on offshore casinos. In 2013, Manitoba launched a government-owned gambling website – PlayNow Manitoba. More than 1000 other unlicensed casinos are operating in the Province.

To conclude, you are allowed to gamble on unlicensed offshore casinos regardless of where you are located in Canada. Doing so will not attract any legal repercussions but you could choose to gamble on licensed government-owned gambling sites in the states of Manitoba, British Colombia, or Quebec.

Now that we have concluded that you will face no legal repercussions from gambling all that’s left is to pick a casino and play, right? Wrong. Canadian law does not allow a company that is based in Canada to offer gambling in the local currency. So if you want to gamble on a government-licensed or province licensed online casino you can only do so in other currencies than your own. The same law applies to all the other Commonwealth countries. If you are willing to place bets on an offshore licensed casino, you could be using CAD and have some deposit options available to you.

Bank wire transfers and credit card transactions are possible but they will be lengthy processes given the international transfer status. On top of that, you will also have to pay exorbitant commissions.

Having access to cryptocurrency would remove all time constraints because a blockchain transaction takes only a few minutes. This method would offer the same results regardless of where you choose to deposit. Most importantly, it would allow you to deposit to government-regulated and province-owned online casinos. If you were to opt for offshore licensed casinos, you would benefit from much faster processing times and zero fees. This will depend on the casino but most if not all don’t have any fees when it comes to Bitcoin deposits. Most Bitcoin casinos are very generous with their bonus offering when a deposit is made in cryptocurrency. Canadian citizens started to favor and specifically search for Bitcoin gambling websites because of the above mentioned reasons.

Gambling and Crypto – The Perfect Combo

The gambling industry and the crypto industry blend perfectly with one another. The two products mesh especially well in countries like Canada where region restrictions and currency restrictions are in place.

Overall, Canada has been making a push towards offering a regulatory framework when it comes to cryptocurrency. The North-American country has been making great progress when it comes to accommodating cryptocurrency as a digital currency. It has been crowned one of the friendliest jurisdictions crypto-wise. The fact that gambling regulation is still in a somewhat gray area, and cryptocurrencies are encouraged makes for the perfect environment. This mesh greatly aids Canadian gambling aficionados in moving their business towards offshore online gambling casinos. Overalls, it’s a win-win scenario. Offshore casinos can receive funds and exponentially grow while the players enjoy a user-friendly platform that allows them to have fun.

Another essential advantage of making a deposit or withdrawal using cryptocurrency is that you can keep your identity hidden. And this is highly relevant if you are going to playing on an offshore gambling site. While Bitcoin might not be 100% untraceable there are other options such as Monero. However, just because Bitcoin could be traceable doesn’t mean that the offshore casinos can identify users based on their cryptocurrency wallets. When you submit a Bitcoin deposit there won’t be any personal data submitted making you immune to identity theft. The only way your Bitcoin wallet, or your identity, could be compromised is if it was linked to fraudulent activities.

Bitcoin, and other cryptocurrencies, have another important advantage over FIAT. Because a central regulating authority doesn’t exist, nobody can remove Bitcoins from your wallet or freeze the account.

Some cryptocurrency-exclusive casinos won’t even require you to create an account with them. On such casinos, you could simply deposit without registering. This is the ideal case if you want to fully protect your anonymity.

The advantages of crypto are impressive but there are some disadvantages we should also cover. Bitcoin, and all other cryptocurrencies for that matter, are highly volatile with prices bouncing up and down erratically. This could mean that what was 500CAD at the moment of deposit could be as low as 250CAD when making the withdrawal within a few hours. However, this could also be considered an advantage if you are knowledgeable in blockchain investment strategies. Another disadvantage of cryptocurrencies is their experimental nature. They are all still in their infancy and some features are still being developed. However, as usage grows, it will become more polished and easily accessible.

Currently, online gambling in Canada is in a grey area. Canadian gamblers are allowed to gamble on government-owned, provincial regulated, and offshore licensed casinos.

We have gone into detail about the legal status of online gambling in Canada as a whole and on a provincial level. It was also presented that the current laws that make it impossible to deposit in CAD and proposed some alternatives that we hope will prove to be useful. We encourage you to engage in the comments and share your experience with offshore licensed casinos to educate our other readers.

The Best Online Casinos by Country | 2021