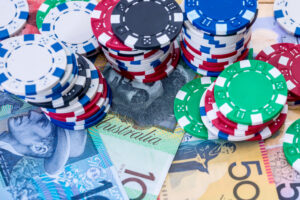 A recent study has been published with the scope of assessing the growth of online gambling within Australia. The study was funded through the Gambling Research Australia (GRA) and has found that 18% of the adults that have been surveyed placed online wagers. A similar survey conducted back in 2010 found that only 8% of adults were gambling online.

The Experimental Gambling Research Laboratory over at Central Queensland University helped interpret the study through Professor Nerilee Hing. She stated that Aussies prefer online lotteries over any other form of gambling, with 10% participation. Horse racing and bets on various sports were the second most popular choices, with a participation rate of 6% on each.

Professor Hing also speculated on the probable reasons for the recent spike and indicated that the gambling sphere has dramatically diversified. Multi-bets, gambling on eSports events, fantasy league sports, or loot boxes have gained traction and attracted citizens who wouldn’t have typically engaged in gambling. She also noted that improved internet connections and intuitive mobile applications coupled with more aggressive marketing from online venues have also played an essential role in the growth of online gambling. The same study has also encountered a surprising find; gambling participation had overall diminished from 64 percent in 2010 to 57 percent in 2019.

Details on the Study

15,000 Australians took part in the survey from Central Queensland University. The National Telephone Survey attempted to compare the findings with the previous study on interactive gambling and assess the differences. The document, found on the Gambling Research Australia website, showcases that young males are more likely to engage in gambling activities. It’s also important to note that gambling incidence heightens based on the level of education. Australian Capital Territory saw the highest percentages at 20.9. A close second was New South Wales with 19%. Queensland, Tasmania, and the Northern Territory saw the lowest ratios, ranging from 9.3 to 13. The survey took into account racetrack, sports betting, keno, and live dealer casino games.

The GRA study also tackled the incidence of illegal gambling on offshore casinos. 26% of the people surveyed have admitted to accessing an unlawful website to purchase scratch tickets. 16% of the 15,000 adults surveyed have also knowingly visited offshore gambling venues to play video slots or table games. However, this percentage is highly debatable because over half of the people surveyed did not check if the online casino they chose had a license.

Similar to the First National Study of Interactive Gambling in Australia, the 2019 survey took a closer look at the negative implications of gambling. The findings were unsurprising and remained relatively similar, with 9% of respondents reporting that they have experienced harm from gambling. 6% have said that they have been harmed by the gambling behavior of their friends or family members.

Between 80,000 and 160,000 Australian citizens experience significant issues due to their gambling addiction. Another 250,000 to 350,000( close to 2% of Australian adults) face moderate risks that might lead to problematic gambling.  Those placing bets on online venues are twice as likely to suffer negative repercussions than those who gamble in brick-and-mortar establishments. To put things into perspective, the Australian government has raised close to AUD7 billion in gambling revenue during 2018. Since 2010, the yearly gambling revenue has been steadily rising yearly, even if the number of gamblers has slightly decreased.

The purpose of the study/survey is to assist the local governments with information to implement the Consumer Protection Framework when it comes to online gambling. The framework aims to enforce a set of ten rules to minimize the effects of online gambling addiction. The measures must be imposed through state and territory legislation that will further align with the current regulations. The ten measures will eventually be enforced on the whole of Australia. Let’s take a closer look at the most important measures:

Most of the previous measures have already been progressively implemented as early as November 2018. The latest survey will serve to better monitor the changes and refine them based on the recent findings. We plan on closely monitoring the online gambling scene in Australia, so don’t miss our following articles.